I know it is corny, but…

I recently returned home from a 3 week trip to Istanbul and England.  My friend Kim and I had planned this trip for over a year.  Kim planned all the Istanbul part and I took the easy part and planned some of the England part.  One of the weeks in England was spent at Oxford taking a class.  I will talk about that in another post.  But I am going to start at the end of the trip with our stay in London.  I have to go back a couple of years though to preface why our visit to Madame Tussaud’s was so exciting for me.

In the summer of 2010, Kim and I had been in London and the one place I told her that I had to visit this trip was Madame Tussaud’s.  I had been there before but I had recently found out that one of my favorite Bollywood actors, Shah Rukh Khan, had had his statue added to the small group of Indian movie stars and I had to go see it!  She was a good sport and went but when we got there we couldn’t find his statue anywhere and when we asked, I was informed that it was on loan to the Los Angeles CA Madame Tussaud’s.  It had been sent in conjunction with the opening of his movie “My Name Is Khan” earlier that year.  I was VERY disappointed...
...but I also remembered that my husband and I would be visiting LA a couple of months later so, my photo shoot with SRK would have to wait.
Fast forward to September and Bruce and I were in LA and went to the museum on Hollywood Blvd. and this time I checked before buying tickets to see if SRK was still there.  The attendant had to check with the manager but I was sadly informed that his statue had just been sent to the NYC 2 weeks earlier.  My hopes were dashed.  As much as I love his movies, I was not going to make a special trip to NYC chasing down his statue!


Now 2 years later, we are on a visit again and I scheduled in advance tickets to go to Madame Tussaud’s.  I am even more excited this time because 2 other of my favorite Indian actors had been added since 2010 so I had really high hopes for this time!


We arrived just as they opening and the line was already quite long but we didn’t have to wait more than fifteen minutes.  We didn’t stay long in the “movie star” room because most of them were the same as last time but the two I did stop at were Colin Firth (YUM!) and Daniel Radcliff (for the grandkids…of course). 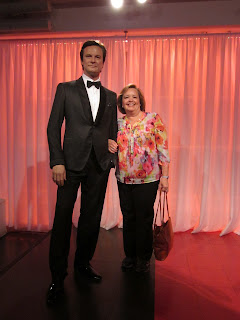 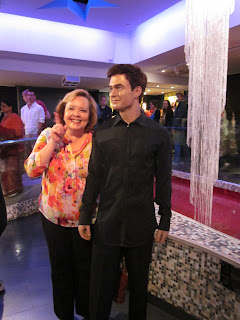 Then we hurried on to find my Bollywood favs and find them we did! Their collection is growing. They have six in total now. I was in heaven to say the least!

You are hilarious! So glad your hopes and dreams were realized this trip. :-)

This is Usha.I realize I had registered with google my given name which I never use and it showed the comment under that name.

Do add Vidya Balan to that list! What will you do if you meet Shah Rukh in person?

Of all the statues, I think only Hrithik's comes close to real!

You're so interesting! I don't suppose I've read anything like this before. So good to discover another person with unique thoughts on this subject matter. Seriously.. thanks for starting this up. This website is one thing that's needed on the web,
someone with a little originality!