Don't be shocked...I am back after a 5 month spell of laziness with a movie review of "Seducing Dr. Lewis"

One of my favorite things to do in my free time or for entertainment is watch a good movie.  I don’t care if I have seen a movie many times; I will watch it again and enjoy it as much as the first time.  I recently got a movie on net flix entitled “Seducing Dr. Lewis”.  It is a foreign movie, (if you call Quebec, Canada foreign), and it is in French, which is such a beautiful language to listen to. 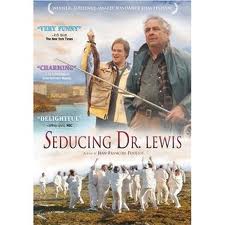 The movie is set in a quaint little fishing village in Quebec that is experiencing the effects of the bad economy and many of the 100+ citizens are out of work, or barely getting by.  A company has agreed to build a factory in the area IF the village leaders can get a full time doctor to live and practice there.  The former mayor of the village, who has had to accept a job in the nearest big city, promises his friends before he leaves that he will try to help them find a doctor and get him to come.  Meanwhile, the village leaders send out many requests to try to entice one to come but none have even thought twice about considering it.  Then one night, while the former mayor is on duty as a policeman, he pulls over a man who has some marijuana in his car.  As he is going through the arrest process he comes to find out that the driver is also a doctor.  They make a deal that he (the former mayor, now policeman) will not process this arrest warrant IF the doctor will agree to visit this village and treat the people for 2 weeks.  The doctor of course accepts this proposal rather than loose his license. 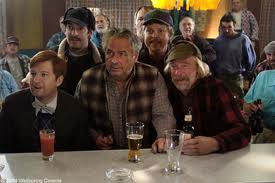 Now the village prepares for him to come.  They learn all they can about him, his likes, dislikes, hobbies, sports, favorite food etc.  They also fix up the town to make it as picturesque as possible in preparation of his coming. 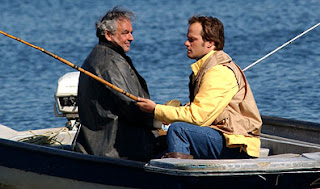 They leave nothing to chance in order to keep this doctor in the village and that is where the comedy begins.  Several things happened to the plan by chance and with luck, but the journey to the end of the story is a fun ride. 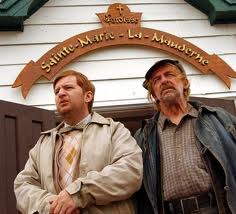 My husband and I thoroughly enjoyed this fun and different comedy.  If you still aren’t convinced that you would like a foreign film due to the sub-titles, this is a fun one to try to see with.  Check it out and let me know what you think.
Posted by Lady Bardfan at 11:27 AM 6 comments: