The Hunger Games-May the odds be ever in your favor!

Three of my daughters (well, technically one is a daughter in-law but she is a daughter to me), had been after me for at least 2 years to read the book The Hunger Games. After hearing the premise of the story, I was surprised that they would think I would enjoy it. The thought of reading a book where, in a future world, in the country of Panem (formally the USA) and food is scarce, 12 districts (kind of like Provinces) were forced to enter 2 or their children between the ages of 12-18 years old in a competition the “Capitol” called the hunger games each year. In this competition the 24 kids would kill each other in a “themed” arena, in order to win the coveted price of extra food for their district for the next year and a few other perks and prizes. These hunger games had been going on for the past 73 years.
Now for someone who loves a happy ending and will READ the ending before starting a book to make sure it is happy, I just couldn’t see how it would be possible to have a happy ending in this book! I found out I was TOTALLY WRONG!!!!! 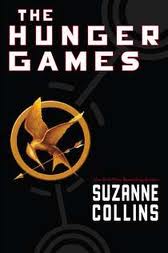 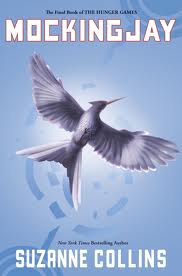 I have never read a more exciting book, but I will warn you, make sure you start it when you have a lot of free time because once you finish the first one you will HAVE to read the 2 sequels, Catching Fire and Mockingjay. I am glad I finally read them after all three books were out because I couldn’t have waited 1 ½ -2 years in between the books. They are insanely exciting!

To the book- As mentioned above, the 12 districts were ruled over with an iron fist by the “Capitol” with their peacekeepers. Each district specializes in producing something the Capitol needs to survive. For example, District 3 produce general electronics, Four-fishing, Seven-Lumber, Eleven-Agriculture, and Twelve-mining, just to name a few.

There had been 13 Districts at one time but District 13 rebelled and started a Civil war and after the Capitol beat them, they were destroyed and the Capitol initiated the hunger games as a reminder to all the other Districts that they, the Capitol, are in control.

That is all background information that you find out in the first 2-3 chapters while we are also introduced to Katniss Everdeen from District 12 on the day of the reaping, which is the name of the occasion when each year the districts pick out the next 2 kids that will play in the hunger games. This year will be the 74th hunger games. Katniss has snuck out of the electric fenced in district to go to the woods to hunt, (which is forbidden), to try to calm her thoughts before the reaping begins that afternoon. Once the District inhabitants are assembled in the square for the drawing, the action of the story never lets up until the last sentence of the book.

Please read these books! They are very well written and have a lot of great lessons in them for kids! I wish I could go into more of the story but I don’t want to ruin any of the excitement for you. There are many great characters, like, Gale Hawthorne, who is Katniss’ best friend and hunting partner, Peeta Mellark, Effie Trinket, Hamish Abernathy, and many, many more. The author even is able to fit in a sweet little romance if you can imagine that in this book! Read it before the movie comes out next spring. I can hardly wait for it! Luckily, I can re-read the books to tide me over until is does. Enjoy the 74th hunger games and “May the odds be ever in your favor!"
Posted by Lady Bardfan at 3:54 PM 2 comments:

Can We Create a New Non-Offending Hand Gesture?!?!

Has this ever happened to you…you are driving along and someone does something that is stupid, dangerous or just rude to you?  What can you do to let them know when the usual hand signal is also offensive to you and you would NEVER consider using it?  What can a person do when they are extremely frustrated by the driving skills or behavior of another person and they want to let them know by making some sort of hand gesture, HOWEVER, the usual hand gesture that is used by the more crude and uneducated of our society is also the wrong thing to do?

I think we need to come up with a new proper hand gesture or signal that will let idiots know that we all know they are idiots BUT is a cultured and proper way.  I have thought long and hard about this.  Some have been shown to me occasionally when I have been…let’s say, less than attentive when driving and they get the message across without being crude and offensive.  So I have been trying to decide what the best “polite” hand gesture should be and start teaching the world some new manners beginning with this.
One option would be, elbows bent, both hands out to your sides, shoulders shrugged and a look of “what in the world do you think you are doing” type of expression on your face.  This however could be dangerous if you are driving since it is a 2 handed gesture.  This could work if you have a passenger that is the designated “signer” that would interpret what you are saying and then sign it to the perpetrator of the offense. 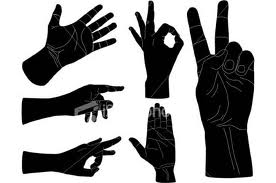 Another option is to try to communicate to them as to what they should have done in order to help them in the future when faced with the same situation.  However, this may take longer than is necessary and if it is a person of a certain gender, they don’t take direction from ladies very well.
The next one I thought of was trying to find out from someone who knows American Sign Language how to sign, “Where are your brains”?  Maybe this can be done with one hand, but usually, sign language is so beautiful when it is being done correctly that the person may think you are saying something nice, unless you are making a very angry face while signing.  Here again though, it may take too much effort when you are trying to still drive correctly and responsibly while trying to improve conditions in the world around you.
The last idea I had which seems the most direct and efficient would be to do the old, twirling of the finger up by your temple, thus let them know you think they are crazy and shouldn’t be driving.  This would be effective if it wasn’t used so much already to signify stupidity is almost every other area of life.  No, we need something just for idiot drivers and I am still at a loss as to how best to let them know what I think of them.  Until I can come up with something, I will continue to yell at them in my car where they will never hear a thing I say, and maybe that is safer for all involved.
Posted by Lady Bardfan at 6:48 PM 7 comments:

Documentries Can Be Fun Also!

I don’t seek out documentaries to watch but occasionally there is one that catches my eye, either by the content, review or word of mouth.  “Exporting Raymond” was one I saw a trailer of on imdb.com after seeing that it was playing at a local theater. 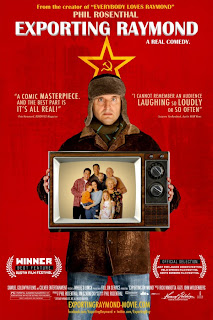 I have always loved the TV show “Everybody Loves Raymond” and seeing the behind the scenes business of shows and movies are one of my favorite things so being able to see the process of a TV show being created in a different country was VERY intriguing.  My husband was a harder sell until I got him to watch the trailer and he was willing to give it a try. 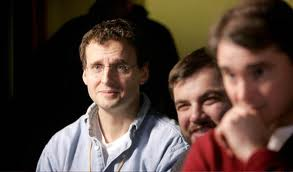 Phil Rosenthal was the creator of the TV show, “Everybody Loves Raymond” (ELR).  After the show wrapped up production for US television, he was contacted by the Sony company about the possibility of re-creating the show in Russia.  He was surprised at some of the American shows that had been successfully remade in other countries.  He agreed to proceed with this opportunity and headed for Russia, after bidding goodbye to his colorful family, many who were inspirations for the story lines in ELR.   Immediately in Russia, it is not the contrast of cultures that is what makes this documentary so enjoyable to watch but it is Rosenthal’s reaction to all that happens around him that is so funny.  He is hilarious, not just his comments but his face registers every feeling he is experiencing without having to say a word many times.  (see the trailer at the link below):
http://www.imdb.com/video/imdb/vi92380441/


The show is eventually made but that doesn’t ruin seeing the process that goes into it finally coming to fruition.  If you don’t think you would like to watch a documentary, try this one.  It is just fun!  Even if you have never even seen an episode of “Everybody Loves Raymond”!
Posted by Lady Bardfan at 4:33 PM 8 comments: