Last summer my husband and I rented a beach house at Capistrano beach in Califonia with space for 29 people.  We had all the kids and grandkids join us for a week at the beach.  I wanted to do something with the grandkids to remember the trip, so I planned a small craft project for them.  What I envisioned was re-doing a corner of my yard and turning it into a “grandma garden”. 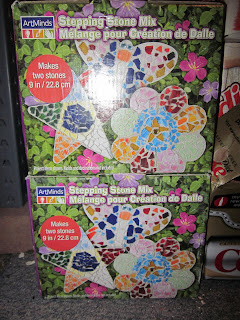 Here is what I did, I bought a stepping stone dry mix from Michael’s craft store.  I tried to find some inexpensive molds but couldn’t so I ended up just using 9 inch Styrofoam plates.  I also bought some “stamps” with the alphabet and numbers, and a large assortment of decorative tiles, mosaic glass, and shells for the kids to decorate their stepping stone with. 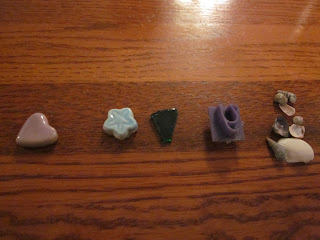 One afternoon while at the beach house when everyone was there, I mixed up enough dry mix with water for each child, one at a time to make their stone.  To personalize it, I had the older kids, whose hands and feet were too big for the molds, just to decorate it and stamp in their initials.  The younger kids I had them either put and handprint or foot print and decorate around it.  Then we let them dry for a couple of days in the sun.  By the end of the week, they were very hard and I wrapped them in bubble wrap to get them home to Arizona.
I had a hard time convincing Miss “G” to let me keep her stepping stone though.  She felt she should get to keep it since she did all the work to make it.  I finally negotiated with her that when I die, she can take it out of the garden to keep.  She was finally willing to let me keep it.  It was pretty funny! 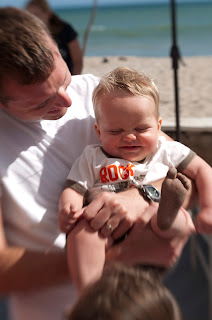 I waited a few months, until it was a bit cooler outside (you know Arizona) and then I began to plan what I was going to do with them.  I had several ideas but the one I decided on was very basic.  I just laid them in a row and planted flowers around them.  It has been in the yard for several months (since September) and EVERY time the kids go outside they all go and check on their stepping stone.  Even Miss “G” is happy that her stepping stone is part of the “grandma garden”.  I want to get pictures of each of the kids laminated and put on stakes next to their stones. 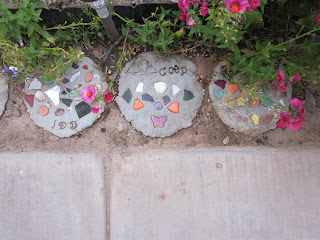 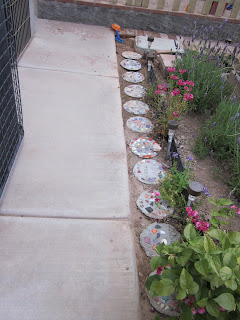 It was quite a fun project for all of us.  However, I am one stone short; we had grandchild #15, born 2 months after our beach house vacation.  I am waiting for him to get just a little bigger and then we will make one for him to be added.
Posted by Lady Bardfan at 9:07 PM No comments: