I have never read “The Complete Sherlock Holmes” before.  I have read different stories here and there, and have read “The Hound of the Baskervilles” twice.  I have even done a review on Sir Arthur Conan Doyle in a book club when we read “…Baskerville…”  Since I really enjoyed as much “Holmes” as I had read so far, I decided to start at the beginning and read all of the stories. However, since I was leaving to go on a road trip, I decided to download an audio book instead. 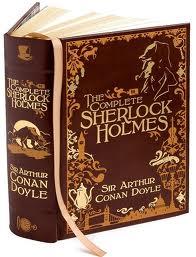 The first story in the audio book was entitled “A Study in Scarlet.  I was happily going along and enjoying the story when all of the sudden there was a drastic change in the story itself.  I thought at first that I had accidently hit a button and changed to a new story because the narrator was talking about completely different characters and they were in the United States heading West with a wagon train.  It was so bizarre.  I kept going back and trying to find the end of the Holmes’ story I thought I had been listening to and couldn’t figure out what this new story was.  Not only was the story in a completely different country but they were talking about 2 characters whose wagon train had been lost and everyone had died except these two, a gentleman and a young girl.


The gentleman and young girl were eventually saved by a passing wagon train of Mormon pioneers, who were headed west also.  The Mormons nursed these two survivors back to health and asked if they wanted to continue on with them to Utah.  The man agreed to their offer and he adopted the little girl as his own.


Well, since I belong to The Church of Jesus Christ of Latter-Day Saints, (the Mormons), I began to be intrigued and I thought, oh well, something crazy happened when I down loaded the audio for Sherlock but I will finish this story and then figure it out later when I got home and I could contact the book audio book company.  However, as the story got further along, and the little girl grew up to marriageable age, the story started taking on a disturbing twist.  It started describing the Mormons as an evil group or church who would not let people who didn’t agree with their precepts live peacefully among them.  It started to assert that church members who didn’t follow everything their leaders said could be killed. 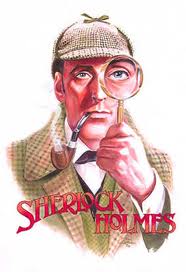 The story also distorted and INCORRECTLY described the practice of Polygamy that the early LDS church practiced.  The Church of Jesus Christ of Latter-day Saints stopped the practice of polygamous marriage in 1890.  Any church member found practicing polygamy today is removed from the church records and is no longer a member. (Click here to read the Official Declaration from the church 122 years ago: http://www.lds.org/scriptures/dc-testament/od/1?lang=eng ).


I realize that I am not an expert on all church history but I do know enough church history and have learned about the history of polygamy in the church, and most certainly it was not at all as Doyle described it in this story!  I could not believe it!  I was shocked and sickened when I thought of all the people who had read this story over the decades, believing the falsehoods.  I had never read anything so insane in my life.  It was so offensive to me that I turned off the audio and listened to something else.


Almost immediately after returning from this road trip, I pulled my copy of The Complete Sherlock Holmes off the shelf and went searching for the ending to A Study in Scarlet, thinking I had been listening to something else.  I thought there had to be some mistake!  What I found surprised me more than anything I have ever read in a book.  The story, A Study in Scarlet is divided into two parts.  The first part was the story that I had been listening to, and then later it switched to the second part which apparently a background story on a couple of the characters who were in part one of the story.  It just takes a long time before the two story lines are tied together, and the murders are solved.


Well, I was surprised and somewhat upset at this… When I thought of all the people around the world who had been reading this story since 1892 and thinking that the lies describing the Mormons were true, it almost made me sick!  I personally don’t have any ancestors who were asked to live the law of polygamy back in the 1800’s.  A small percentage of the early pioneer church members were asked to do this.  However, I know and have read stories about some of my husband’s early ancestors who were in polygamous marriages back then.


It is my understanding that those men who were asked to take more than one wife at the time were men who could financially handle the responsibility.  Many men had been killed or murdered in the early days of the church, and there were more female converts than males.  This meant that there were many single women and women who were widows having families in the harsh frontier areas who needed someone to help support them.  If one was asked to take another mate, his first wife would need to give her consent to the arrangement or it would not take place.


No man was supposed to take another wife without the prior consent of the first wife.  My husband’s family history records a great story about church leader Brigham Young coming to visit one of the family heads to ask him if he would be willing to take another wife.  Brigham Young found the man working out in the field, and asked him the question.  This man responded to Brigham Young that he should be the one to go and ask his wife about the possible arrangement.  So, Brigham went to the house and asked her.  The wife’s immediate response was to throw her hot coffee on him.  At this, Brigham Young left the home and went back into the field to find the husband.  He told the man that he should not worry about taking another mate, for he already had “enough wife” to handle and certainly didn’t need another…!


My point of all this is the fact that so many people have misconceptions about my church and it is often because of lies like the ones told in Conan Doyle’s Sherlock Holmes story that have persisted and have been spread for well over one hundred years.  Such stories are believed to be true even though they are in a work of fiction and the premise was based on falsehoods at the time they were written.


When I told my friend Kim about this incident, she found this quote in Wikipedia about this particular Sherlock Holmes story:


According to a 1994 Salt Lake City newspaper article, when Conan Doyle was asked about his depiction of the Latter-day Saints' organization as being steeped in kidnapping, murder and enslavement, he said: "all I said about the Danite Band and the murders is historical so I cannot withdraw that, though it is likely that in a work of fiction it is stated more luridly than in a work of history. It's best to let the matter rest". However, Conan Doyle's daughter has stated: "You know, father would be the first to admit that his first Sherlock Holmes novel was full of errors about the Mormons." Years after Conan Doyle's death, Levi Edgar Young, a descendant of Brigham Young and a Mormon general authority, claimed that Conan Doyle had privately apologised, saying that "He [Conan Doyle] said he had been misled by writings of the time about the Church.  However, in a preface to Volume II of The Complete Novels and Stories of Sherlock Holmes, Loren D. Estleman noted the implied criticism of the Mormon Church. He states that the story was not controversial at the time of the story's release, probably due to the recent memory of the Mountain Meadows massacre and the small membership of the church.


In August 2011, the Albemarle County, Virginia School Board removed A Study in Scarlet from the district's sixth-grade reading lists following complaints from students and parents that the book was derogatory toward Mormons. It was therefore moved to the reading lists for the tenth-graders, and remains in use in the school media centres for all grades.  (Wikipedia)


My message to those who think they know about The Church of Jesus Christ of Latter Day Saints, (or sometimes called “the Mormons”), PLEASE look for an accurate source to learn the truth about the Church.  If you know someone who is LDS, for example, you could go to them and ask them the questions you have, or check out the Church’s web site www.lds.org .  You can write in questions and someone will answer them.  Or, you could also talk to missionaries of the church; not to be preached to, but to get answers to questions so that completely false narratives will not be perpetuated.