What Happened to Church Bells?


I recently was working a show (I volunteer at the souvenir table for Southwest Shakespeare Company at the Mesa Arts Center), and as we finished up after intermission, and I was walking to my car, the bells at the Methodist Church just south of the MAC began to ring 12:00, noon. 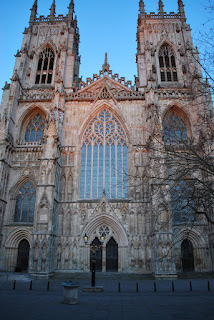 York Minster Abbey, York, England
It was so beautiful and it made me wish that all the churches still had bells. I never get to hear church bells unless I am in England and it is such a beautiful sound. 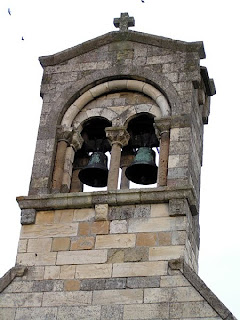 Random church bells
When did churches stop putting bells in them? I know in my lifetime, at least not that I am aware of, there haven’t been any churches built of any denomination that have had bells built in them. One other church here in Mesa had church bells. They were electronic but they were still beautiful. It was in an Episcopal church we lived by when we first moved to Mesa in 1982 and I loved listening to them. 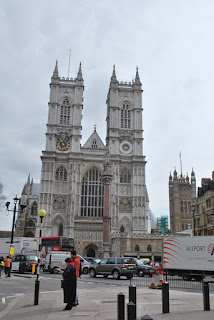 Westminster Abbey, London, England
I later read in the newspaper that the neighbors were complaining so I think they stopped them, which was very sad.

I wonder if the demise is the church bells has to do with the advent of the telephone? I know in the past, the bells were used to alert, warn, or call the people of the area, so maybe they weren’t needed as much with the invention of the telephone. 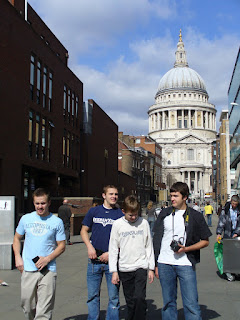 My nephews, Mitchell, Tyler, Thomas, and son Michael with St. Paul's Cathedral in the background
I don’t know what the reason is but I miss them. Now, if I am ever needing to go downtown, I try to time it so I am there when the bells will be ringing. It is just beautiful!
Posted by Lady Bardfan at 1:30 PM 2 comments:

I Have a New "Cause"...Down with Green Dots!

I have to admit that I have a MAJOR sweet tooth! I have also come to realize that your tastes change as you get older. As Shakespeare said, “doth not the appetite alter? A man loves the meat in his youth that he cannot endure in his age.” (“Much Ado About Nothing” a2 s3).

Kenneth Branagh as Benedick in "Much Ado About Nothing"
For example, I LOVE chocolate!

My favorite candy bar! Dark Chocolate Bounty bar
However, I don’t like milk chocolate anymore, only dark chocolate. Also, I would rather have other types of candy over chocolate, like Starbursts, Hot Tamales, or Dots.

Which brings me to my point; I think we need to get rid of the green dots. They taste AWFUL!! Usually different colored candy taste all the same, i.e., M&M’s, they all taste the same no matter the color. Not so with Dots! The green ones taste so nasty! So I am starting the “Get rid of the green dots” movement. Who is with me???
Posted by Lady Bardfan at 5:33 PM 5 comments: 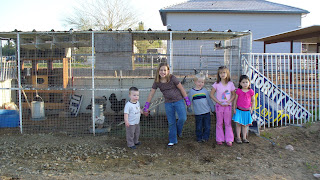 4 of my grandkids and a friend in front of our chicken coop
I have wanted to get chickens for several years, but was unwilling to give up any of my garden for them to live in. I didn’t want to lose my “Alice Garden”, my “Train Garden”, the Sandbox/play area for the grandkids, so I was frustrated as to how I could have chickens that I could get eggs from. I finally came up with a solution! My son in-law, Sam, and daughter live in a more “rural” part of Mesa where he helps his dad breed and raise Rocky Mountain horses (here is a link to his web-site for the horses:    http://www.rockyjohn.com/index.htm ) . 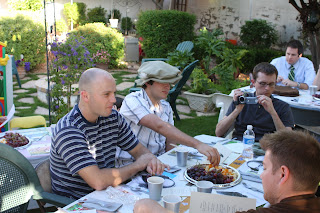 Sam, my "project manager" and son in-law, is the first on the left
I thought of asking him if he had a corner of their property where I could set up a chicken coop and buy some chickens to put in it and we could share the eggs. I figured I could get down there every day to feed them, since it is only 5 minutes from our house and I promised to do all the work. He was so enthusiastic about the idea that I haven’t had to do anything else. I have luckily become the silent partner in this project. He was able to find a coop that his brother was no longer using and he got some friends and family to help him move it to their property. I had planned on just a few, 5-6 chickens but this coop is so big that he thinks we could get up to at least 20 chickens in it. 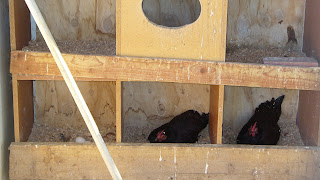 He also has a few pigeons in it that he uses to help train his hunting dogs which he also raises (he is such a talented GUY!). 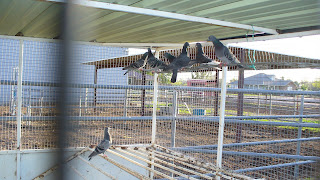 Pigeons in the coop...YUCK!
The first addition to the coop was a rooster that a friend, Jill, had and wanted to get rid of. Then we got a
a few laying hens. 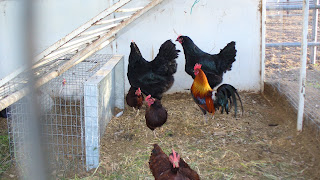 Why is the rooster the most colorful one!?!?! 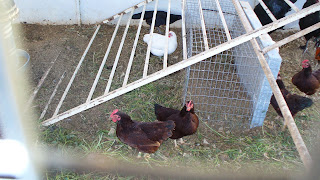 Last week we got some chicks that a school teacher here in Mesa had hatched in her class room. She didn’t want them after they had hatched and Jill, the friend who gave us our starter rooster, contacted us to see if we wanted them because she didn’t need any more chickens right now. 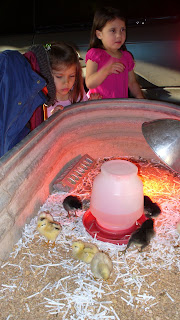 Miss G and Miss E introducing me to our chicks
They are so cute! My granddaughters introduced me to each of the chicks and told me the names of each of them, including Cutie Pie, Banana Bread, Blackie, and “Sticky”. They named him that because he has dried poop on his behind! 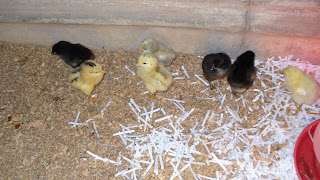 The chicks are too young to go into the coop yet but will be added when they are bigger. I have received about 2 dozen eggs so far, including 2 pigeons eggs that I just can’t bring myself to eat yet…I HATE PIGEONS! But the other eggs have been amazingly good! 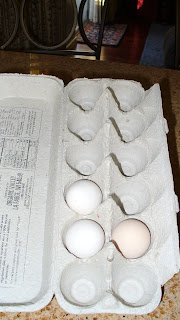 My first eggs!
Anyway, this project has turned out great, especially for me, since I am the silent partner and just get to share in the eggs. Thanks to Sam, my great son in-law!
Posted by Lady Bardfan at 3:06 PM 4 comments:

For Christmas my husband had considered getting me a “Kindle” for a gift. Luckily, he asked me first and I told him I wasn’t interested in one. 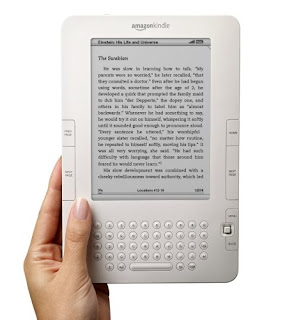 Since then I have been doing a lot of thinking about books verses Kindle’s or other types of electronic reading objects. Here is what I have decided.

I love books. I love reading books, I love ordering books, shopping for books, talking about books, and especially I love looking at beautiful books on a bookcase. So what would I need a kindle for? I can see the advantage of having one for traveling. My friend Kim has blogged about how nice to have several books on her “Kindle” and not have to pack the books, thus making her luggage lighter. I think traveling is about the only time I would use a “Kindle” type device is for reading. 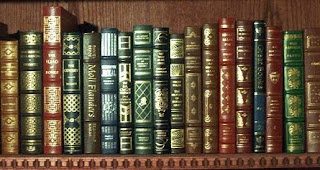 However, if I was to read a new book on a “Kindle”, and I loved the book, I would end up buying the same book as a hardback copy for my bookshelf. I look at them almost as a friend that I always want to have around more than I think of them as "works of art". I want to know that friend is here if I need to read it again or just re-read my favorite parts. For example, can you EVER get tired of reading Captain Wentworth’s letter to Anne Elliot in Persuasion? Or the scene in “Our Mutual Friend” where Bella Wilfer realizes how much she really loves Mr. Rokesmith? Another example; any of James Herriot’s stories… I could read those over and over again and still laugh or cry at the same stories. 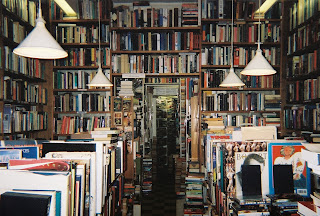 I also would need to get a copy in paperback so I could lend it out. I don’t like to lend out hardback books in case they get lost and I have to replace them, so I have a hardback and paperback of all of my VERY favorite books, if possible. That way I can lend them out and know I will be able to talk about the book with another friend after they are finished reading it.

I have had to put myself on a “no buying another book” diet until I have read all the books in one of the stacks of books that have built up on my shelves. I have been pretty good too. It has been almost 2 weeks since I bought a book!

So I think I will stick to paper and leather instead of electronic and plastic.  At least until they come up with an affordable device that I could use just for traveling.
Posted by Lady Bardfan at 6:14 PM 2 comments: