I Now Know Who John Galt Is!!!

First, let me say, Atlas Shrugged  by Ayn Rand, was not a book that I would have read on my own accord.  I was stressed out enough in the sixth installment of the Harry Potter books, Harry Potter and the Order of the Phoenix, when Professor Umbridge took over the school and kept adding new policies and directives. 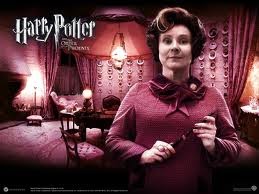 So, a book about the Government usurping power from the people of America was just too frightening and in my opinion too relevant in today’s world.
However, the book was recommended to me by my friend Kim, as a gift idea for my husband, who is impossible to buy gifts for, but he is a news junkie. 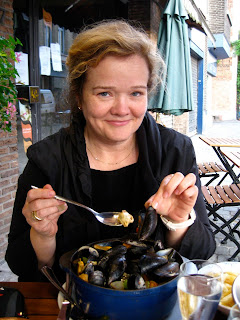 Kim, on our trip in Belgium
He is one of these people that if he wants something, he buys it(if we have the money), and so there is never a “wish list” for me when it comes to birthdays, and Christmas.  It is very frustrating but…that is a topic for another blog.

Anyway, Bruce, my husband, commutes between 80-90 miles a day to work so he listens to many podcasts while in the car.  So a book on CD was really a perfect gift idea.  It would take weeks to listen to all 50 CD’s!  Well, he still hasn’t listened to it; another gift bites the dust… (again, rants for that other blog post).
To justify the money spent on yet another ignored gift (can you tell I am bitter?), I adopted the cd’s and began listening to it.  I was immediately hooked into the story of Dagny Taggart, the strong but still feminine businesswoman, and the Taggart Transcontinental Railroad Company. 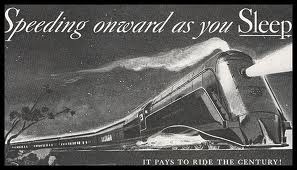 The characters were very 3 dimensional for me also. Actually, the one character that was the LEAST 3 dimensional was John Galt.   Maybe it was because he was in the shadows for most of the book so he wasn’t as developed as the other characters were, like, the ingenious Hank Reardon, pathetic Jim Taggart, devoted Eddie Willers, and the nauseating Wesley Mouch, and the others that we interacted with regularly.  But despite that, it was the characters that got me emotionally involved in their lives. 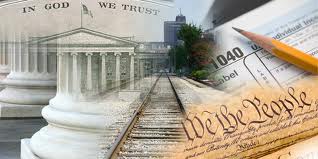 Again, I wonder if this is because of the political climate of today and you could put real faces to the fictional names in the story, but it made the story very engrossing and I looked for opportunities to get in my car just so I could listen to it.  Luckily it was before the awful jump in the gas prices.
I marveled at how, no matter what the government threw at businesses to take more power and initiative away from them, Dagny was able to find a way to work around it.  I also found it ironic that it was a woman who didn’t give up when all the businessmen did. 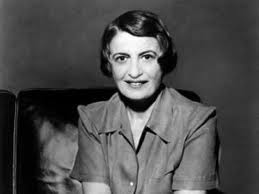 Ayn Rand
I wonder if Ayn Rand felt she was being a bit sexist in making Dagny the last holdout in fighting against the government, or maybe just giving women more of the power she felt they deserved in the ‘50s when this was published.
SPOILER ALERT!!!  I did have to borrow the book from Kim so I could read the ending a few times to reassure myself that the “people” would prevail over the government because I got very discouraged at times by all the power that the government was able to usurp from the businesses and the individuals that created and ran them.
There were a couple of points in the book that seemed a bit implausible to me, the first was the "refractor waves".  I am not a scientist so I don’t know if “refractor waves” really do what the book says they do, but either way, it was still very entertaining.  The other point was who Dagny ended up “being with” in the end.  I won’t name names but she had much more passion for the first two men in her life, than the one she decided to stay with at the conclusion, but at least it was a happy ending.
I highly recommend this book to EVERYONE, no matter what side of the political fence you are on.  I don’t know if it would change anyone’s mind in what policies they think are right or wrong but, it did really made me think about the world we live in today and what could possibly happen in the future if we stay on the same path we are on now.
Posted by Lady Bardfan at 5:08 PM 10 comments: